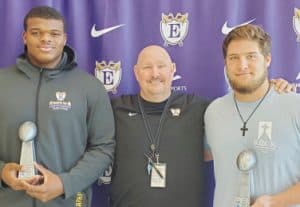 Robby Harrison has plenty of young fans in Greenwood County. Now, he has one more in Horry County.

The Emerald High star defensive lineman was among 88 of South Carolina’s top high school football players in Myrtle Beach for the Touchstone Energy Cooperatives Bowl Dec. 11. The all-star game pitted players from the state’s North versus the squad from the South. The South team won the game 20-17. 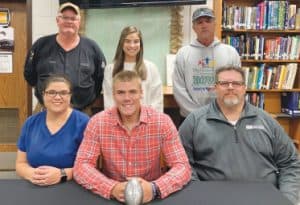 Part of the week’s experience was a Christmas shopping spree at a Myrtle Beach Target for 44 deserving kids from Horry County Schools. South Carolina’s electric cooperatives provide each child, chosen by school district officials, a $150 Target gift card. Not only do deserving children receive some early Christmas gifts, it’s also an opportunity for participating players to take a break from the gridiron and get into the spirit of giving.

“It meant a lot to help kids in need,” says Harrison. “I wish I could have given a lot more to them.” 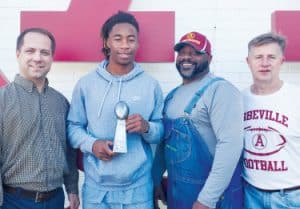 “He was very happy with what he got,” says Harrison. “He loved that someone older was talking to him.”

In addition to the shopping spree and the game, players rode in the Touchstone Energy Cooperative balloon, which lifted them above Doug Shaw Memorial Stadium the night before the game. The players also participated in Lineman Demo Day, in which they explored careers as lineworkers through six hands-on demonstrations presented by Horry Electric Cooperative linemen.