‘It turns out, I was right’

When he was 17, Clay Charping was delivering gas for Beaty Oil Company. One of his stops was Little River Electric, and there were two things about the cooperative that made Charping want to be there permanently.

“I knew I wanted to work outside,” recounts Charping. “And I knew a lot of the guys and I thought this would be a great place to be. It turns out, I was right.”

Earlier this month, Charping concluded a 35-year career at Little River Electric. Most of that time was spent in the elements, first on the cooperative’s right of way crew, then on a line crew, on an underground crew and as a foreman. For the last 14 years, he’s been over operations at Little River Electric, a position that came with an office but didn’t always keep him there. 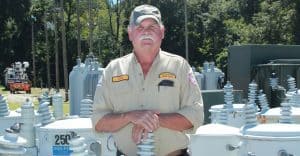 Clay Charping retired this month after a 35-year career at Little River Electric.

Charping was just as correct about the culture.

“I’ve worked with the greatest bunch of people in the world,” he says. “They’ve always got your back and it’s never any trouble to find help when you need them. The crews I’ve had made me look like I know what I’m doing.”

Charping’s colleagues feel the same about him.

Drayton Freeman, Little River’s new manager of operations, has worked with Charping for 331/2 years. “He has been a dedicated employee and his word is as good as any contract,” says Freeman. “He will truly be missed.”

Retirement won’t impact Charping’s outdoor agenda. He and his family run Triple-C Farm, where they train horses for rodeos.